Charles Henry Barstow was born in England in the year 1856. Named after his father Charles Luke Bastow [sic],
he was the 2nd youngest child of Charles snr and Eliza Arundale, who in turn gained the name from
Charles Luke Adshead. Although born in Droylsden, the family moved to Hooley Hill, Audenshaw in
the 1860's to Guide lane which was at the time a large hat manufacturing centre on the Lancashire/Cheshire border.
Also popular in that area of Hooley Hill were non-conformists methodist churches with 3 located roughly
on Guide lane which passes through the village.

The Barstow family took advantage of the school attached to Hooley Hill Wesleyan Methodist Church
(aka Guide Lane Wesleyan Methodist chapel). We know through church registers that they were
parishioners and also from local newspaper reports.
In 1869, the siblings of Charles H Barstow took part in a performance at the schoolroom (miss E A Barstow,
Mr J Barstow and Mr W Barstow corresponding to Elizabeth Ann, John and William along with
miss M Buckley - Mary, future wife of John Barstow)1. It is therefore probable that as a pupil, Charles
may have laid the foundations for his professional literary endeavours at this school. 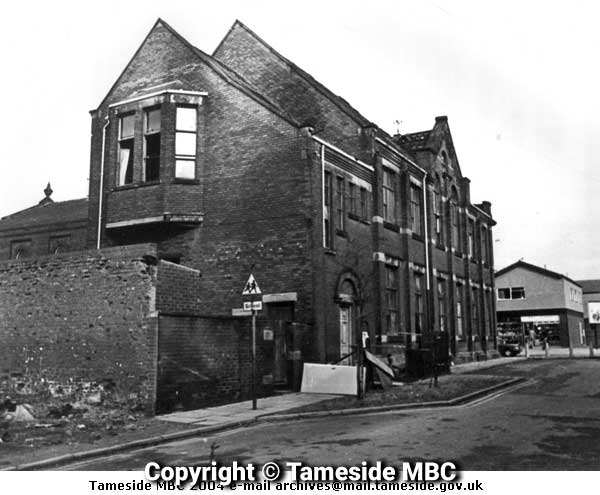 The rubble in front of the wall is what was left of Hooley Hill Wesleyan Methodists school in the late 1970's.
Note the red triangle school warning road sign post outside what was the school yard entrance.

Prior to that in the 1860's, the family (Arundale's) were heavily involved in the reconstruction of this
Methodist chapel on Print Street which is now Chapel Street2.

The many second hand books available seem to be mostly gifted to children (school prizes and family presents) so Charles
can be described as a children's author as well as poet and lyricist from his other published works. The following is a list
of novells and works in book form:

1879 Wildings from the field of song. By Charles H. Barstow (poetry).
1884 Old Ransom; or, Light after darkness. A story of street life, etc.
1884 Daddys Bobby - might be Daddy's Bobby; or, the Star of Bethlehem; ... and other stories of Manchester street life
by Hesper and Naomi [According to page 3 of Angels Unawares, is joint author (so before 1897) but may have been
confused by the publisher with "Old Ransom" on printing]
1895 Angels Unawares / Angles Unawares, etc (first appeared serialised in 1886).
1896? Old Bond's Atonement. By Charles Barstow - according to page 3 of Through Deep Waters.
1897 Natty's Violin, etc. (illu by Aimee G Clifford}.
1898 Through Deep Waters, etc.

A number of his works describe Charles H Barstow as coming from Hooley Hill. This is correct as the Barstow family
lived in Audenshaw. The publisher / printer of his early works was Griffin and Sheard of Stamford street in Ashton-under-Lyne.
This is the local town a mile or so from Audenshaw in what is now Tameside. Publishing dates for his books range from 1879
through to 1898. He was certainly alive during this time. The preface to Wildings from the field of song says "The Author
would add, too, that inasmuch as he has but just passed his twenty-third birthday...". This pin-points is birth year to 1856.

My great-great grandfathers youngest brother was described in various census as a clerk in the cloth industry
and even a county court bailiff in the census for England and Wales.

In all census records, he is described as single and no marriage record exists for him. He died on 28th June 1922 aged 66
and was buried with his brother in law Hugh Sharples at St Stephens Audenshaw. Later interned was his sister Emma Bastow,
the wife of Hugh3.

In addition to the obvious Hooley Hill link, a number of connecting documents highlight addresses recorded in the census.

The following webpage contains a (non-exhaustive) list of poems, book extracts and song lyrics attributed to Charles H Barstow.
They appear in newspapers and journals published all over Great Britain.

The creative output of Charles H Barstow extends to Dickensian style children's fiction (juvenile), poetry and music lyrics.
Considering he produced a number of published works, there is no record of a will for Charles H Barstow which
may indicate lack of success or greedy literary agents and publishers.

The Barstow's of South Lancashire are not related to the author Stan Barstow.